Together with scores from an internal panel of judges from F J Benjamin Lifestyle,  Jerry Chew and Dyanna Erkek from Singapore, Mohammad Ezra and Jarrod Lee from Malaysia and Janina Joesoef and Medina Yavuz from Indonesia emerged as winners and graced Spring 2011 window displays of  GapKids and babyGap stores in Singapore, Malaysia and Indonesia. 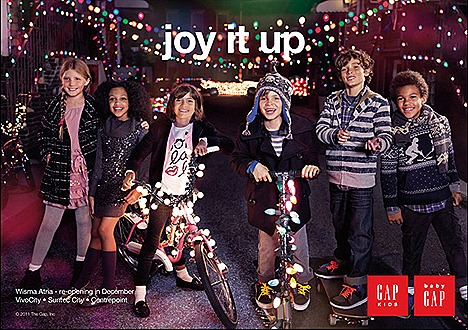 Gap Casting Call 2011 will take place at  Galleria Foyer, Suntec City. Parents meeting a minimum qualifying spend of S$100 will be encouraged to enter their children to this contest (from newborns to 10 years of age). Photographs taken by GAP will be uploaded at facebook.com/gapsingapore and narrowed down to the Top 100 spread across four categories – Boys, Girls, Baby Boys and Baby Girls. 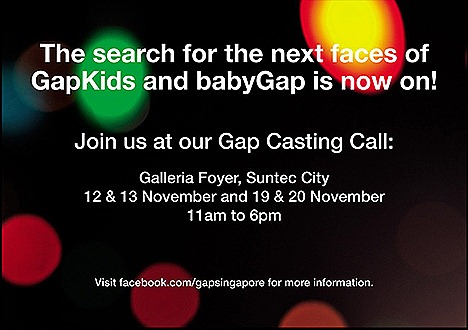 Public voting starts 25 November till 25 December.  An internal judging panel from F J Benjamin together with Gap representatives will select  6 final winners in February 2012 and  be featured on the Spring 2012 window displays of all babyGap and GapKids stores in all three countries. In addition, the winners from Singapore will also receive a $1,000 Gap gift card each. Visit facebook.com/gapsingapore, facebook.com/gapmalaysia or facebook.com/gapindonesia for more information.