Multiple Grammy-Winning Legend Sir Elton John was honoured at 20th World Orchid Conference held at Marina Bay Sands  Singapore. Organised by the National Parks Board and Orchid Society of Southeast Asia , the orchid extravaganza featured some 50,000 orchids of 5,000 varieties  from 13 to 20 November 2011.


To recognise his contributions to the field of music, Dr. Kiat W. Tan, Chairman of 20WOC Organising Committee and CEO of Gardens by the Bay, presented Sir Elton with an orchid named after him - Doritaenopsis Sir Elton John. 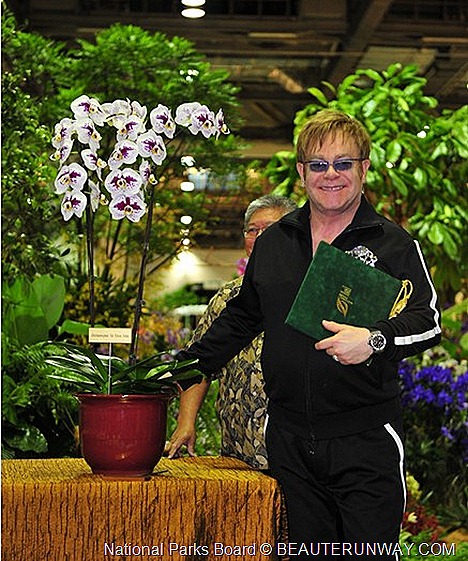 The 'Doritaenopsis Sir Elton John' is a hybrid orchid with a striking magenta pattern and a golden forked lip, over large white petals, to reflect the singer's flamboyant personality. 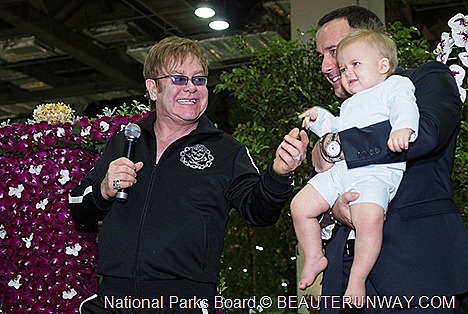 Elton John is known to be a true garden lover, a reflection of his British roots.  I have met Elton John with his partner, David Furnish at the famed Chelsea Flower Show in 2007 and 2008 during the private showcase with Queen Elizabeth and Prince Philip, together with esteem members of the Royalty and State of Heads while i was working in London.

Doritaenopsis Sir Elton John will be on display periodically at the National Orchid Garden at Singapore Botanic Gardens, and at Gardens by the Bay Flower Dome when it officially opens in June 2012.
Posted by Beauty Runway at 1:18 PM