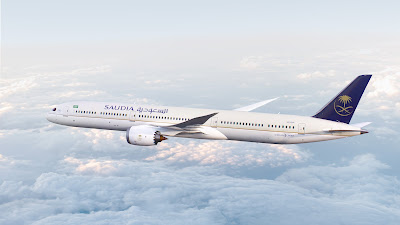 The new JED-RUH-ICN flight route is inline with the Saudi Aviation Strategy, which aims to connect the Kingdom to the world with more than 250 destinations, across four continents, including all 28 domestic airports in Saudi Arabia and improving the carrier’s competitive position internationally with its young fleet of aircrafts.
"As the Wings of Vision 2030, the national carrier has the necessary capacity to continually broaden its route network and welcome a wide range of visitors into Saudi Arabia.” said Engr. Ahmed Alwassiah, Chief Operating Officer of SAUDIA. “To support our strategic objectives, we ensure our airline’s 144-aircraft fleet is suited with the latest in-flight innovations and plan to modernize and expansion. 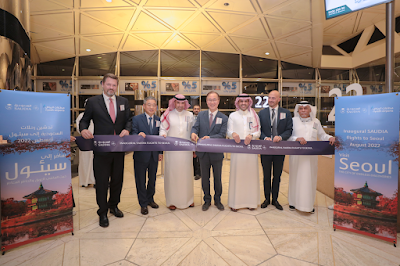 The milestone Seoul-Riyadh flight follows SAUDIA flight SV898 from Riyadh to Seoul with the traditional water salute at Incheon International Airport and attended by His Excellency Ambassador of the Custodian of the Two Holy Mosques Sami AlSadhan, His Excellency Park Joon Yong, the Ambassador of the Republic of Korea to Saudi Arabia,  senior government officials, dignitaries, diplomats and members of the media, partners from the domestic travel and tourism sectors. 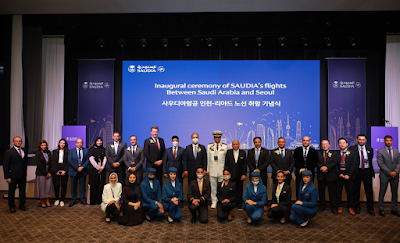 Established in 1945, SAUDIA is the national carrier of the Kingdom of Saudi Arabia and is one of the Middle East’s largest airlines. A member of the International Air Transport Association (IATA) and the Arab Air Carriers Organization (AACO), SAUDIA is a member airline in SkyTeam, the second largest alliance, since 2012.
SAUDIA was named the Middle East’s Fastest Growing Airline in 2022 by Brand Finance® and the World’s Most Improved Airline in 2021 by Skytrax, the second time it has received this prestigious accolade.

The airline is ranked as a Global Five-Star Major Airline by the Airline Passenger Experience Association (APEX) and has been awarded Diamond status by APEX Health Safety powered by SimpliFlying in recognition of its comprehensive approach to safety during the pandemic.