These highly popular stalls serve delicious must have Singapore local street food and have long snaking queues at all hours !


VOTE & WIN HUNGRYGOWHERE DINING CARDS WORTH S$8000
Support and vote at www.hawkerheroes.com and you may win up to $8000 worth of HungryGoWhere Dining Cards in all restaurants that accept MasterCard. Voting closes on 2 July at 11.59pm. SingTel Hawker Heroes Cook-Off  top three hawkers and further details will be revealed on 3 July so stay tuned! 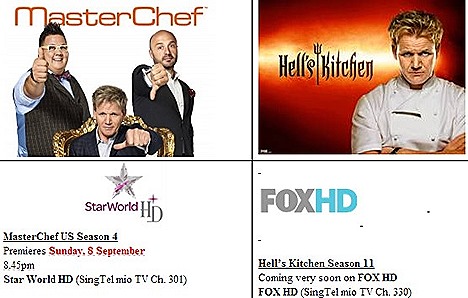 
Judging by the popularity of Gordon Ramsay Singtel Challenge, fans arrived as early at 8am at Maxwell Market to see how the Michelin Starred Chef fare in the crash course for cooking Singapore's famed hawker dish - Chicken rice. We cant imagine the mob at Newton Circus on Sunday evening, will the fans queue overnight in anticipation, just like for McDonald's Hello Kitty Fairy Tale Collection or H&M store openings?

All 1000 coupons are fully redeemed to try out Gordon Ramsay and Singtel Hawker Heroes food before 3pm, July 7th as fans queued very early in the hot sun, armed with mats, chairs and umbrellas, hours before the scheduled culinary cook off time.

Jumbo Seafood Chilli Crabs - It was a breeze to eat the crab as the flesh falls off effortlessly from the shell whereas Gordon Ramsay's serving had the crab meat stuck on the shell. For the Chilli Crab sauce, Jumbo version maybe a little spicy for some while Gordon's interpretation was more tangy with more tomatoes based flavouring.

328 Katong Laksa and Tian Tian Chicken Rice won the hearts of the voters and Gordon Ramsay's Jumbo Seafood Chilli Crabs won marginally by a mere 5%. Singapore Hawkers Heroes were the ultimate winners for the challenge.