VivoCity Singapore will host Esmeralda, the four-masted barquentine tall ship of the Chilean Navy which is on its 57th voyage around the world. Also known as The White Lady, Esmeralda holds the record as the world second-tallest and longest ship with its mast height of 48.5 metres and 113 metres in length.


Docking in Singapore for the second time, Esmeralda is an ambassador of Chilean culture to each port it visits and is manned by its 353 crew members.  Esmeralda’s 10-port voyage will take 260 days and more than 30,000 nautical miles to complete. The Chilean Navy training sailing vessel will leave Singapore for Mumbai, India on 14 August. 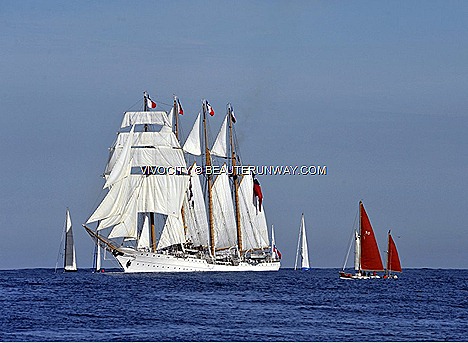 Visitors will get an opportunity to tour the Esmeralda which have travelled to over 60 countries and immerse  in the heritage and culture of Chile and speak with the ship’s crew from August 10 to 14, with guided tours from 2pm and 6pm on 11 and 12 August.


Admission to Esmeralda ship is free, and children under the age of 10 will have to be accompanied by parents.  The Esmeralda Military Band will perform Latin music at VivoCity Amphitheatre on Level 3 from 7pm to 8pm on 11 and 12 August.

VivoCity Shopping Centre is located at 1 HarbourFront Walk and is accessible by public transport including NorthEast Line MRT, buses and taxis. Check out VivoCity FaceBook for more updates.
Posted by Beauty Runway at 4:09 PM